Congratulations to Livia in Year 11 who was selected to represent Victoria and Australia for debating in 2021.

Livia’s success is certainly well deserved. She has participated in a broad range of Fintona’s debating opportunities. She was a member of the 2020 State Champion C Grade Debating Team and won a ‘Swannie’ award for best speaker in her division in her first year of DAV debating in 2019.

‘Overall, it’s an amazing opportunity that I’m very excited to be a part of,’ said Livia.

Due to covid restrictions, Livia joined the Australian team in Tasmania as they debated online against 78 other countries, emerging from the preliminary rounds with five wins, securing themselves a spot in the Finals.

The first final against Mexico saw Australia oppose the motion that ‘In times of economic crises, This House believes that the government should withhold information that is likely to damage market confidence’.

Emerging victorious in a unanimous decision, Australia moved on to the round of 16 (Octo Finals), coming up against the undefeated Hong Kong, again as the opposition speakers. For this round the motion was ‘This House would ban users from selling their data to companies in exchange for financial returns (i.e. receiving fixed monthly rates, dividends, etc., for the use of their data by companies)’. The Hong Kong team ultimately emerged victorious, however the Australian team held them to the highest of standards. The Hong Kong team would eventually continue through to the Grand Final, only losing to Canada.

Livia spoke both as first speaker and the reply speaker, effectively opening and closing the Australian cases; her speeches demonstrated the development of her speaking skills since first being selected for the Victorian team at the start of 2021.

At the end of the tournament, Livia was ranked 36th overall our of 374 individual speakers registered. Livia’s average score was 72, while the best speaker of the tournament’s average was 73.17, demonstrating again just how well Livia has developed her speaking skills through participating in these competitions. 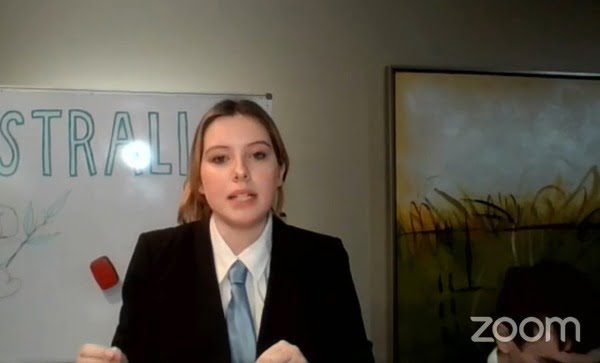 Geography: A Window to Connect with the World